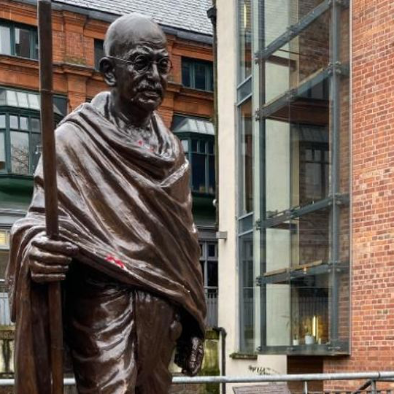 Benjamin Stacey
bbc.co.uk
Go Back
How Do We Decide What Is Appropriate To Do And What Isn’t?

I have often heard it said that religion and faith leaders should not meddle in politics. It has also been said, including this week, that the judiciary should not enter into the political arena and rule on government or parliamentary matters.

A statue of Mahatma Gandhi is being unveiled in Manchester next week on Monday 25th November outside Manchester Cathedral.

At 11am there will be an interfaith service of non‐violence, peace and unity hosted by
Manchester Cathedral featuring a selection of readings, poetry and songs. Although it is by invite‐only, events inside the cathedral will be shown on a large screen outside open to the public for viewing.

From 12pm there will be celebrations with dance and music from Manchester University students, followed by a special performance from The Voice Kids finalist Natasha Seth of the Parrs Wood school choir.

Some people may be surprised that there have been protests about the fact that there is to be a statue of Gandhi here in Manchester and that we are celebrating his life.

Mahatma Gandhi is renowned across the globe as a symbol of peace, non‐violence,
resistance and resilience. To mark the 150th anniversary of his birth, a bronze statue is to be erected in Manchester city centre as a tribute to the global ambassador. The city council has granted planning permission for the statue as a gift to the city with the intention of promoting world peace and harmony.

There have, however, been some opposing voices to this celebration from some students and from some religious and national groups because of their concerns about some actions or decisions Gandhi made when he was younger, among other reasons. This has even led to concerns about whether some groups should and can be represented in the service or celebrations.

This highlights the difficulties of arranging anything that has political connotations,
especially where it overlaps with religious communities. There are always going to be
different ways of seeing particular events and incidents and we are very aware that this leads to differences of opinion and disagreement. These can lead to problems between different communities and groups.

As an interfaith network, the Faith Network for Manchester will always look for the positive and seek to foster cohesion, understanding and harmony. We will look for and support ways to bring people together with positive messages and to increase the opportunities for involving people in shared projects.

So next Monday, while many of us are celebrating what we understand to be a life working to teach the world not to use war and violence, but instead to follow a path of peaceful protests, it is also important to recognise that even the most cherished and inspirational leaders for many, were not perfect at all times. So whatever our attitude to the ceremonies and dedication of the statue to Mahatma Gandhi on Monday, may we all find ways to continue to work together to develop further understanding and to commit ourselves to working for peace, love and justice in our world.

We Are Hiring!
Faith Network for Manchester in Lockdown
The Interface Between Religion or Faith and Politics
I have often heard it said that religion and faith leaders should not meddle in politics. It has also been said, including this week, that the judiciary should not enter into the political arena and rule on government or parliamentary matters.
All News